by A Fistful of Rock & Roll 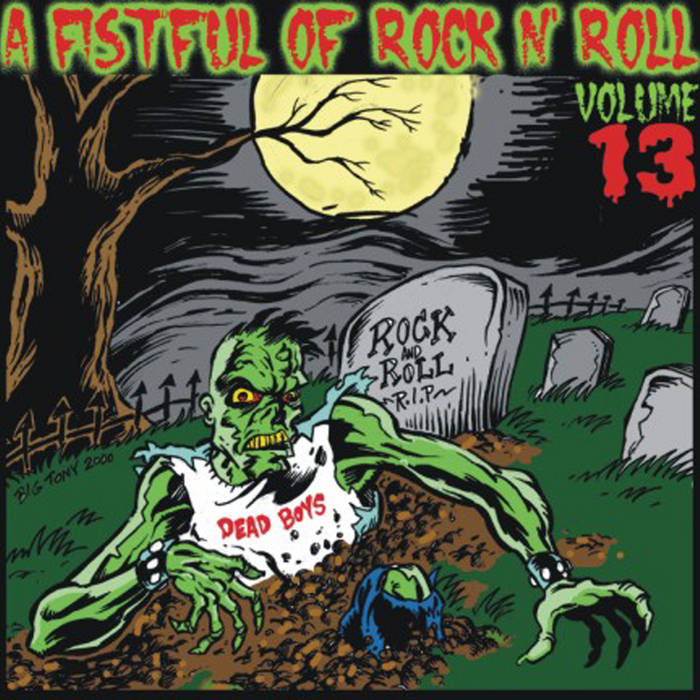 FINALLY! A compilation series that accurately represents today's underground Rock & Roll scene. In the grand tradition of the Pebbles and Nuggets compilation series, "A Fistful Of Rock & Roll" features some of the finest music, influential artwork by today's most highly adorned poster artists, extensive liner notes, and much more!

A Fistful of Rock N' Roll is the brainchild of Electric Frankenstein's Sal Canzonieri, who, after many requests from bands, fans, and the music press, has set out on a project so ambitious that it can only be compared to the legendary Pebbles and Nuggets series; a series so vast that it will eventually document every great garage band performing today. The series, currently consisting of 13 volumes in all, also includes amazing artwork by some of today's best poster artists.

The A Fistful of Rock & Roll compilations series has been receiving international acclaim for its exciting High Energy Punk Rock and Roll, done with the all the great intensity of such bands as the Stooges, MC5, Dead Boys, NY Dolls, Ramones, Sex Pistols, Damned, Black Flag, Misfits, AC/DC, Kiss, Cheap Trick, Aerosmith, Motorhead, and other favorites.

Chronicling and shaping the second Garage Rock wave as it happens - A Fistful of Rock & Roll!

The compilation series covers a real movement, a working-man’s answer to what is missing from popular music in the world today; straight-up, raw, in-your-face, combustible Rock ‘N’ Roll. The A Fistful of Rock & Roll series simply has no equal.

Come check out the most acclaimed compilation series ever! See why Kerrang says it’s “The Ultimate punk rock n roll anthology – designed as an antidote for the current crop of pre-processed music clogging up chartdom!”. Yep, this is the real thing baby! Real Rock N Roll, that kind that juvenile delinquents are spawned from, rumbles fought over, hot rods revved up with, and cool people have sex to.

Complied as an on-going series by Sal Canzonieri of Electric Frankenstein, “A Fistful of Rock n Roll’ is already being compared to the legendary Pebbles and Nuggets series. This history making comp is not only a veritable who’s who in rock today (covering in its 13 volumes all the greats such as Nebula, New Bomb Turks, Donnas, Hellacopters, Electric Frankenstein, Dwarves, Supersuckers, Zeke, and many more), but also features covers done by the finest of today’s poster artists (Alan Forbes, Jeff Gaither, Johnny Ace, Dirty Donny, and more!)

Each volume contains plenty of variety with the brightest stars, the most up and coming, and some brand new kids on the block. All top notch rawk and roll outfits that span the globe showing off their catchy, guitar driven and full out rock! If you're a rock fan that's disgusted with the mainstream or if you'd like a quick education in what rock music should sound like, then seek this CD series and prepare yourself for a lesson you'll never forget.

FINALLY! A compliation series that accurately represents today's underground Rock & Roll scene. In the grand tradition of the Pebbles and Nuggets compilations . ... more

Bandcamp Daily  your guide to the world of Bandcamp